Amman is a metropolis in the centre of Jordan, Amman’s location and altitude has a profound effect on its climate. The weather in Amman is highly unpredictable, especially in the winter: there will often be a very pleasant and sunny morning, followed by a cold, snowy or rainy afternoon, or vice versa. Temperatures are known to drop or rise suddenly. Fog can sometimes cover the entire city for days, even weeks, and lightning storms, although infrequent, can happen suddenly. The summer’s pleasant temperatures can be disturbed by heatwaves that suddenly raise the city’s temperatures to around 36 °C (97 °F) and in some rare but recorded cases to as high as 41 °C (106 °F).

The city’s largest airport, Queen Alia International Airport, situated about 30 minutes south of Amman, is the major international airport for Jordan and the hub for Royal Jordanian, the flag carrier.

Amman is a regional hub in communications, transportation, medical tourism, education, and investment. Amman is aggressively positioning itself as a hub for business, and new projects are continually transforming the city’s skyline.

Amman is a major tourist gateway in the country because most of the country’s foreign tourists arrive in Jordan through Amman. Amman is currently experiencing rapid growth in many different areas, with large growth seen in the real estate, construction, banking, finance and business sectors. Numerous skyscrapers are under construction as the city municipality recently lifted the ban of buildings taller than 4 stories and allocated designated areas for high rises. All major highways of Jordan cross in Amman making the capital busy with freight trucks, buses and cars passing through the city.

West Amman, however, is less densely populated and more scenic. It is also the more prosperous part of Amman, with much of the city’s economic activity being centered in West Amman. Mof the city’s 5-star and 4-star hotels are located in West Amman. Important districts include Shmeisani and Abdali, the main economic centers of Amman, Abdoun, the up-scale residential district, and Jabal Amman, one of Amman’s historic districts. A large contrast exists between the more affluent districts of West Amman and the lower class districts of East Amman.

Amman is one of the most liberal cities in the Middle East and Eurasia. Amman is also one of the most westernized cities in the region, ahead of places like Cairo or Damascus. Its culture and arts scene is thriving. Its freedom of worship is a long standing tradition of Jordan. The Jordanian media is also one of the most unrestricted in the region. Jordan has no laws forcing women or men to dress in a particular way. However, appropriate attire is expected around places of worship of both the Islamic and Christian faiths.

Amman has a very high percentage of tourists visiting the city. Much of Amman’s tourism is focused in the older downtown area, which is centered around the old souk (a colorful traditional market) and the King Hussein Mosque. Since Amman resembles Rome, as it is situated on seven hills, the city was a favorite place for Roman soldiers and officials. Behind the Roman forum stands a Roman theatre — the largest theatre in Jordan — with room for 6,000 spectators. Thought to have been built between 138 and 161 AD by the Roman Emperor Antoninus Pius, it is constructed into the side of the mountain and is still used for sports displays and cultural events.

There are numerous nightclubs and bars across the city especially in West Amman. Modesty in dress for men and women go out the window and low-cut shirts, tank tops and short-skirts are common. 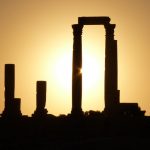 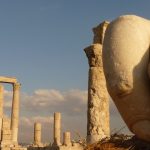 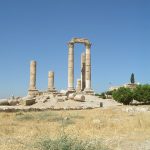 Be the first to comment on "A Visitor Guide To Amman"